Should Christians Keep the Sabbath? 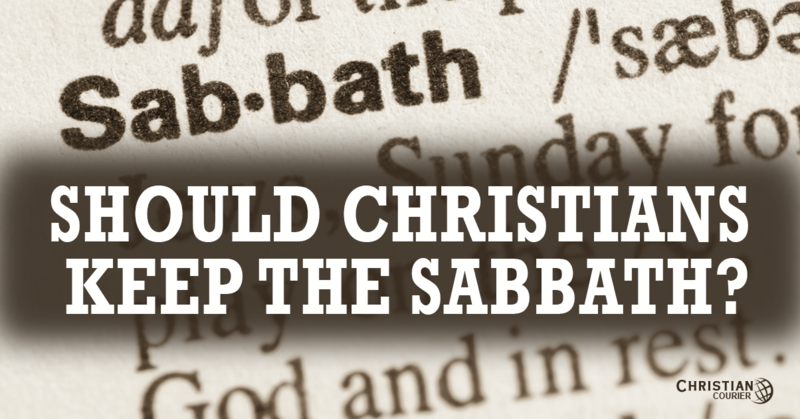 In these times when so many are concerned about the moral deterioration of our nation, this recommendation is occasionally made: “We need to get back to the ten commandments as our code of conduct.”

Although the motive for such an admonition is doubtless honorable, it suggests a common, though erroneous, concept about the nature of the ten commandments.

In the first place, most of us (all who are non-Jews) have never been under the decalogue. The ten commandments were a part of the Mosaic law, and that system was given to the Hebrews alone (Deut. 5:1-5).

That does not suggest that the ancient Gentiles were exempt from religious and moral responsibility. It does mean that non-Israelites were never amenable to the Mosaic code per se.

That aside, it is a logical fact that if one argues for the re-institution of the ten commandments, he must, if consistent, contend that the Sabbath requirements are binding as well. This view, of course, is promoted by the Seventh-day Adventists and other Sabbatarians, but it does not reflect the biblical perspective.

In this article we wish to show three things. First, the church of the first century, as directed by inspired leaders, did not observe the Sabbath.

Second, the unique features of the Old Testament Sabbath demonstrate that it was never designed to be an international requirement.

Third, the Scriptures explicitly teach that the Sabbath has been abolished. Let us pursue each of these lines of thought.

Try as one might, he will search in vain for New Testament evidence that the primitive church observed the Sabbath with apostolic approval.

Yes, it certainly was the case that the apostles frequented the synagogues on the Sabbath for the purpose of proclaiming the gospel. That is where the greatest concentration of Jews would have been (cf. Acts 13:14; 17:1-2, etc.), and the message regarding Jesus was to be spoken first to them (Rom. 1:16).

But where is the evidence that the early church, under divine guidance, came together to worship God on the Sabbath day?

The kingdom of Christ was established on the day of Pentecost (Acts 2:1), which always fell on “the morrow after the Sabbath” (Lev. 23:15-16), hence, on Sunday. So the church started out meeting for worship on the first day of the week (cf. Acts 2:42).

The disciples at Troas “were gathered together” [passive voice] upon “the first day of the week” to break bread, i.e., to worship, (Acts 20:7). The specific day of meeting was no accident. Though Paul was anxious to get to Jerusalem (20:16), he waited seven days for the opportunity to assemble with the church.

Moreover, the passive voice (see above) indicates that the assemblage was orchestrated by someone other than the disciples. It was of divine initiative.

The saints in Corinth were assembling, and contributing into the church treasury, “every first day of the week” (1 Cor. 16:2 — Greek text; cf. NASB).

On the isle of Patmos, John was “in the spirit” on “the Lord’s day” (Rev. 1:10). The term for “Lord’s” is kupiakos, which is defined here as “relating to the Lord.” Thayer comments: “the day devoted to the Lord, sacred to the memory of Christ’s resurrection” (365).

The Gospel narratives, of course, make it clear that the resurrection occurred on Sunday. While Revelation 1:10 would not be conclusive by itself, the very fact that the day is specifically mentioned is significant.

We must also add this note. While it was true that some weak or uninformed Christians had a problem making a clean break with the Mosaic economy (Rom. 14:1ff; Gal. 4:10-11), it is important to recognize that inspired apostolic teaching sought to correct this error.

Also, there is the record of the post-apostolic patristic writers.

For the first three centuries of Christian history, the testimony is uniform that the original disciples of Jesus Christ worshiped on Sunday — not on the Sabbath. Here is a sampling of that testimony.

The Didache (c. A.D. 120) declares that “every Lord’s day” the Christians gather themselves together and “break bread” (ANF.VII.381).

The Epistle of Barnabas (c. A.D. 120), in discussing such things as incense, new moons, and Sabbaths, says that the Lord “abolished these things” in deference to “the new law of our Lord Jesus Christ” (ANF.I.138). Later, it is affirmed: “Wherefore, also, we keep the eighth day with joyfulness, the day also on which Jesus rose again from the dead” (I.147).

Justin Martyr (A.D. 140) declared that “on the day called Sunday” the primitive Christians met for worship. He further stated that this was the day on which Christ was raised from the dead (I.186).

Clement of Alexandria (A.D. 194) spoke of the one who “keeps the Lord’s day” as “glorifying the Lord’s resurrection in himself” (ANF.II.545).

Tertullian (A.D. 200) argued that the “old law” had been consummated; thus the “observance of the Sabbath is demonstrated to have been temporary” (ANF.III.155). Elsewhere he says that “Sabbaths are strange” to Christians, and that they share together “the Lord’s day” (70).

Eusebius (A.D. 324), known as the “father of church history,” stated that Sabbath observance does not “belong to Christians.” On the other hand, he asserted that Christians “celebrate the Lord’s days . . . in commemoration of his resurrection” (26,113).

“The universal and uncontradicted Sunday observance in the second century can only be explained by the fact that it had its roots in the apostolic practice” (478-479).

Finally, we must make this comment. It is incorrect to refer to Sunday as “the Christian Sabbath.”

First, in considering the Sabbath requirements of the Old Testament era, perhaps it would be helpful to point out that there were many other “Sabbaths,” in addition to the seventh-day Sabbath, which the Hebrews were required to keep (cf. Lev. 19:3; 26:2).

In a fifty-year span, the faithful Hebrew, to one degree or another — depending upon the specific requirement of the law, would observe 5,830 Sabbaths. Contrast that with the fact that the average Sabbatarian today, in the same time-frame — keeping Saturday alone — would honor only 2,600 Sabbaths, thus, fall 3,230 Sabbaths short of the divine standard.

Second, as noted earlier, the Sabbath, as a religious requirement, was restricted to the Israelites. It was not a part of any patriarchal covenant (cf. Dt. 5:2-3). Rather, it was an ordinance made known at Sinai (Neh. 9:13-14), which served as a “sign” between Jehovah and his special people (Ezk. 20:12). Thus, Gentiles have never been obligated to observe the Sabbath day.

This is clear evidence of the fact that the Sabbath was not intended to be a universal requirement. Prof. Rawlinson observes that “in the warm climate of Arabia and Palestine artificial warmth was not needed” (378).

For example, Jerusalem is in the same latitude as New Orleans and Houston. The average annual temperature is sixty-five degrees, and it seldom falls below forty (see Jackson, 11). One can only imagine what it would be like attempting to keep this ordinance in Alaska or Siberia.

The Scriptures are emphatic that the requirement to keep the Sabbath has been terminated. New Testament data lead to the conclusion that the law of Moses (with all of its components — including the Sabbath) has been abrogated.

Paul affirmed that the “law of commandments” was abolished “through the cross” (Eph. 2:14ff). Similarly, the “bond written in ordinances” (which contained such things as feast days, sabbaths, etc.) was taken out of the way, having been nailed to the cross (Col. 2:14-16).

Sabbatarians allege, however, that only the ceremonial features (e.g., animal sacrifices) of the Mosaic covenant were abolished at the cross. The moral elements of the law (e.g., the ten commandments), it is argued, continue to this very day.

This position is arbitrary, artificial, and will not stand the test of scripture. Observe the following.

God promised to make a new covenant, which would not be like the one given to Israel when the nation left Egypt (Jer. 31:31ff). When that new covenant was given, a change in laws was made (Heb. 7:12).

But the old law, bestowed when Israel came out of Egyptian bondage, contained the ten commandments (1 Kgs. 8:9,21). Thus, the decalogue passed away when the Old Testament was replaced by the New.

Dead to the law

In Romans 7, the apostle argued that the Christian is “dead to the law through the body of Christ” (4). He further contended that the child of God is “discharged from the law” (6).

Clearly, the law to which the Christian is “dead,” i.e., separated from, and from which he is “discharged,” included the ten commandments. The Christian is not under obligation to keep the Sabbath.

The fact is, just after he affirmed that the law was “nailed to the cross,” Paul declared that no one could “judge,” i.e., condemn (cf. Thayer, 361) a Christian for not keeping feast days, Sabbaths, etc. (Col. 2:16). That statement could not have been made had the Sabbath law still been operative.

We do not doubt that many Sabbatarians are genuinely sincere in their profession of keeping the seventh day. But sincerity alone does not justify. The modern practice of Sabbath-keeping is erroneous.